For a long time when my focus was on half-marathons, I said I would never be able to stay interested enough to keep running for a full marathon. The thought of a 3 hour training run held absolutely no appeal for me. But sometime during 2009 I think I realised that my HM times were never going to get back to where they were in 2001 or even maybe 2007. Perhaps it was time for a new challenge.....
And then in early 2010 a running friend who lives in New York state suddenly announced that she had signed up for the New York Marathon. I had no idea that it was possible to qualify for guaranteed entry to NYC; I thought it was just the lottery for everyone. In retrospect that sounds dumb, but the world of marathons was uncharted territory for me at that point.
An idea began to take hold: my HM time was fast enough to guarantee me entry for NYC....maybe Mum would come and mind the kids for a week or 10 days......maybe DH could be persuaded that a lightening trip to NY in November was a good (as opposed to insane, extravagant or just plain ridiculous) idea.....maybe I would sign up myself.
The day my status changed to "Accepted" was the day I realised this was serious - we were going to New York! I found myself a relatively simple training plan by Hal Higdon and marked the dates on my calendar. After the relative success of my May HM I started marathon training in late June.
The training
18 weeks, Hal Higdon's Advanced II plan.
I had no major problems with the training plan and the weekly mileage peaked at 53, which in retrospect was fairly modest, as marathon training plans go. The long runs increased slowly from 12 miles (19.2km) to the big one: 20 miles, a distance I completed 3 times during the cycle. After the first one I realised, maybe it would be a good idea to take some energy source along, and settled on GU Chomps. After the second one I realised, maybe I should be taking water too? IDIOT. Needless to say, my 3rd (and final) 20 miler was my favourite.
The travel
My experience of running overseas while living in the UK introduced me to the wonderful concept of running tourism. What better way to get to know a new city than to run a major race there? And what better justification for a trip to New York than to run my first marathon??
The trip to New York was utter luxury: for the first time in over 4 years no screaming baby or manic toddler to worry about, just me and my surprisingly roomy seat on an A380 Airbus, watching movies that did not involve Bob the Builder or the Wiggles. HEAVEN.
The atmosphere in New York was electric when I arrived there 4 days before the marathon. The city was filled with runners, all jumpy from tapering, and as the signs and seating went up in Central Park it really sunk in that I was about to actually DO this. I tried not to tire my legs out by walking too much in the days before the marathon, but it was impossible. The day before the race, DH and I went for a final, gentle jog in Central Park and got caught up in the finish of the International Friendship Race; of course I couldn't resist getting a cheesy picture with my national flag. 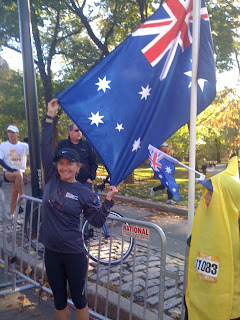 Race day
It's still dark and just 38F/1C at 6am when I take the ferry over to Staten Island, and not much warmer throughout the subsequent 3 hours I spend waiting for the 9:40am start. I'm all layered up in old sweats but still, I'm freezing. As the sun comes up it's a beautiful, clear fall day, perfect racing conditions in fact. Finally at 8:20am it's time to enter the corral - Blue Wave Corral 4 - and then at last we move down and onto the ramp approach to the Verrazano Bridge.
Frank Sinatra's "New York, New York" is playing over loudspeakers as the gun goes off and after all that waiting we are suddenly off and running. It takes me less than 90 seconds to get over the actual start line - the dangerous congestion I was expecting thankfully does not eventuate - and so begins my first ever marathon. Miles 1-2: 7:11 (average pace min/mile)
First mile is uphill with lots of people around, but second is downhill and well below 7:00. Whoa, slow down!
Miles 3-4: 7:02
Obviously not listening to myself at this point.
Miles 5-6: 7:08
Ok, by now I know I'm going quite a bit faster than my stated goal pace of 7:40, but I can't hear my Garmin beeping the splits (the crowd is deafening), so I give up worrying about it and just go with the flow. Hmm, possibly a mistake.
Miles 7-8: 7:11
Miles 9-10: 7:15
Miles 11-12: 7:23
Starting to calm down a bit and getting closer to the pace I said I'd run. No problems at this stage....
Miles 13-14: 7:10
I go through the halfway mark in around 1:36 and I'm feeling fine.
Miles 15-16: 7:24
The Queensboro bridge, first major obstacle of the course so far. It's a punishingly long uphill, not steep, but it just keeps going. I slow down somewhat and my Garmin freaks out when it loses the satellites on the lower deck of the bridge.
Miles 17-18: 7:01
Oops. The excitement of turning onto First Avenue, Manhattan and seeing my DH in the crowd is a little too much and suddenly I'm flying along again on the adrenaline rush. 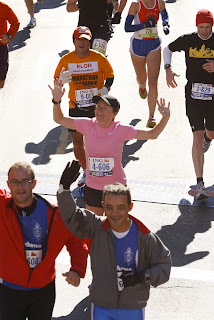 Miles 19-20: 7:23
Still ahead of the pace I set as my "goal", but finally I'm slowing down. This is supposed to be where many people start hitting The Wall. I actually realise that this is getting harder now, and I lose focus for the first time.
Miles 21-22: 7:39
I'm struggling a bit and letting the pace slide now. I check my Garmin and uh-oh, not happy. All week my American friend Glenn has been goading me about how fast I can run this, though, and his words echo in my head now....so I tell myself "You can do better than this", put my head down and pick it back up.
Miles 23-24: 7:30
DH spots me (I don't see him) and texts my other friends (including Glenn) that I'm not looking so happy now - but when I see Glenn jumping up and down I'm waving like a clown and not looking nearly as horrible as he expected. And I'm nearly there now! The crowds in Central Park are unbelievable, it's like running in the Olympics, and the adrenaline carries me on.
Mile 25-26.2: 7:22
I wave to some random people in the grandstands near Columbus Circle as I turn off Central Park South and head towards the finish. They go nuts and I start laughing - it's such a thrill - and with a big smile still on my face I cross the finish line in the official time of 3:17:02. Woohoo! 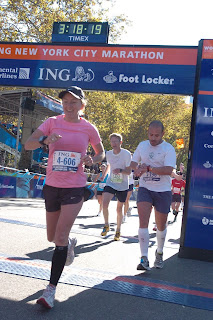 They say the best thing to do after a marathon is to keep moving, and it's unavoidable anyway as I have to walk past 59 other UPS trucks to get to the one holding my stuff. Then I have to walk back and out of the park, find my cheer squad and walk all the way back to our hotel near Columbus Circle. This means we cover close to 3 or even 4 miles by the time I get to sit down, but I feel pretty good. After I say goodbye to my American friends and take a luxurious shower, DH and I go and eat greasy pizza in a diner near our hotel, and damn if it doesn't taste just wonderful.

The next day, walking down stairs is not too pleasant and my quads are fairly trashed, but at least I can make it onto the plane back to Australia - unlike some other guy who they have to load in a wheelchair. I refrain from wearing my medal on the plane, though.

There's no doubt that I am hooked on marathons now. In terms of preparation and execution, I can only think of one or two things I would have changed. I'm thrilled I went so far under my official stated goal of 3:30, but aware of the fact that I ran a fairly large positive split (1:36 and 1:41 approximately) and that I can probably do a lot better next time.

Which leads us inevitably to the weekend of April 10th, 2011.