We all know how THAT turned out, and time and events conspired to keep me from participating again until this year, when I somehow decided that a 14km race the day after a week of skiing (during which no running would happen at all) would be just the right thing to do. After securing a preferred runner start - to make up for the one I missed back in 2001 - not even a flat battery before the 5-6 hour drive from the snowfields could dissuade me from running the City2Surf again.

However! I am usually ridiculously healthy and can count on one hand the number of times I have been sick in the past few years. BUT -  the week at the snow had other things in store for me. Many people get sick while tapering for a marathon, their bodies seeing the sudden reduction in training as some sort of signal to shut the immune system down for a while. For me, no running whilst skiing translated into a day of gastro (thank you, children) followed by the insidious onset of a nasty head cold. During the taper for Gold Coast, I had 2 small kids coughing all over me and in my face for the entire two weeks and I was fine -- but now, I was down for the count. All together now: SIGH.


The travel
We drive up to Sydney from skiing with the obligatory stop at McDonalds, where I sneeze, blow my nose and make myself eat half a piece of banana bread in a very half-hearted attempt at carbo-loading. The kids are extremely excited to arrive at the swanky Shangri-La hotel for a very short (12 hour) stay, and one of them comments on how pretty all the city lights look with all that rain on the windows outside! Rain? Yep, rain. Awesome.


Race Day
I'm awake as usual at 5:30am and lie there feeling reluctant until 6am, when I get up and slink around in the dark getting dressed. I pull an enormous fleece top that is left over from when I was pregnant (yes, it's really enormous) over the top of my race outfit, fill my pockets with vanilla GU pouches, slip my phone into a plastic ziplock bag and set off for the train station. At least it's not raining - and fairly quickly I decide to jog to the start area rather than bothering with the train. In no time at all I am in Hyde Park, and it's fairly deserted still, so I make use of the porta-loos and then just wander aimlessly around until it's time to start warming up. 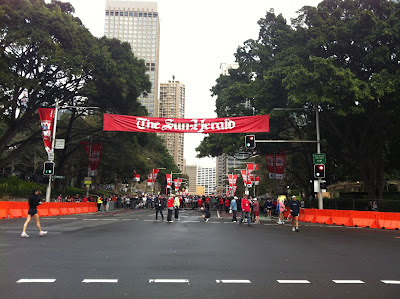 It's really quite cold, for Sydney, and I don't feel even remotely warm when I finish a few laps up and down William St in front of the start line. I haven't eaten breakfast so I remember to take a GU an hour before the start and another 15 minutes before; that will have to do me until I get to Bondi. I keep the hideous fleece on until there are so many other bodies around me that I can make do without it, and lined up in the preferred runners' area I'm totally surrounded by men who are taller than me. One of them is dressed as Superman (he has a seeded number!) and another as Spiderman (complete with mask) - I have no idea why. At least they're blocking the wind.

I shove my (plastic-bag-protected) phone in the side of my bra, but it feels weird. I stick it down the front, but that's plain strange. I try to stuff it in my shorts pocket, but it's too big. Eventually I decide to put it down the back of my bra. This is not a clever move, and I will find out why in about 7 miles' time.

It might be the cold making my brain fuzzy, but I don't even get nervous while I'm standing there. It's as if I'm just there to hang about with a whole bunch of people, and what's this about a race? Huh? When the gun goes off I'm moderately surprised (did someone get shot?) but I hit my Garmin and move forward with surprisingly little difficulty considering how crowded it is. And wheeee, I'm off down William St with 25,000 of my closest running buddies right around me.

Mile 1: 6:09 (pace in min/mile)
Immediately I don't really feel good. The downhill bit is great but the uphill towards Kings Cross is not - I feel like I'm working too hard and I can't find that "comfortably tough" gear I usually use for races. And, it's cold and windy. I'm starting to resign myself to the fact that I may not beat 2001's time after all. This is the first negative thought that enters my mind, and it won't be the last.

Mile 2: 6:21
Hmm, that's slower than I was hoping - somewhere along the line, 6:20 has become my goal pace. I know that will get me at least close to my ancient PR, so 6:20 it is. The hills just keep coming. I can't get comfortable. Man, this race really SUCKS.

Mile 3: 6:18
I haven't seen Spiderman or Superman again, but now at least I pass Chewbacca, who is loping along and not looking happy. A light rain starts - it's not too unpleasant, but it will be if it gets any heavier - and I'm acutely aware that Heartbreak Hill is coming up soon. Could I get any more disinterested in this race? I wonder.

Mile 4: 6:26
The start of the big hill slows this mile down somewhat. I'm trying to remember how long it is, and memories from 2001 flash through my mind: a fellow runner encouraging me, his words about pumping my arms and keeping my stride short. No problems with the second part of that - my shuffly gait is perfect for hills, really - and soon I'm passing quite a lot of people.

Mile 5: 6:52
Ugh, Heartbreak Hill is TOUGH. Much longer and steeper than its parent hill in Boston - and there are no cheering people or signs to let you know it's almost over. I glance at my pace and see 7:11, which makes me seriously annoyed, and that speeds me up enough to get my average pace back up some. And then finally that goddamn hill is over....

Mile 6: 6:08
Ok, this one is a surprise. I still don't feel like I am really running well or all that fast, so 6:08 is not what I was expecting for this mile. I go through the 10K mark in around 39:30, and now there's an evil headwind, and nobody around me really to block it. Lovely - more negative thoughts crowd in and I try in vain to shut them out. My phone is sliding down from between my shoulderblades and I shove it back into position a few times without realising what is about to occur. The course is still undulating but I think that's the last hill - no, that one must be the last - no, that one is definitely it. I think.

Mile 7: 6:41
I'm zooming along past a water stop when it happens: before I can reach for it, my phone (lubricated, no doubt, by sweat and rain) suddenly slides down the back of my shirt and hits the road beside me. OMG! I screech to a stop and grab desperately for it. It takes me several goes to get hold of the bloody thing - during which time, thankfully, nobody steps on it - and some choice words come out of my mouth whilst I'm flailing around trying to keep my balance on the slippery road. Starting back up again feels HORRIBLE - I've never liked stopping during a run - and I've lost at least 10-15 seconds in the process. Bugger. Did I mention that I'm not really enjoying this run? At least there's less than 2 miles to go.


Mile 8: 5:49
Downhill!!! I shove the stupid phone down the front of my bra; my boobs now look flat and square, which is fine with me at this point. A girl in a white shirt passes me then slows; I pass her right on back and keep going. The mile split beeps and I realise I just made up most of the time I lost on Heartbreak Hill and in the phone fiasco. Could it be that I'm still on track? I cannot bear to look.

Last 0.75 miles: 6:05 pace
This bit is all flat, along Campbell Parade to the roundabout and then a sharp turn onto the finish chute by the beach. I'm telling myself to just keep going, just keep going - white shirt girl passes me but I just don't care. I round the corner and make myself look up: the clock is ticking over to 54:00! I have 90 seconds to get over that line and I'M GOING TO MAKE IT!! I put my head down and sprint with all I've got left, which is not terribly much, and then I'm over the line and grinding to a somewhat wobbly halt.

The Analysis
New PR! Hooray!! I cannot quite believe it. I really didn't do much right in the lead-up to this race - I got sick, I didn't carb load at all, I didn't run for 7 days beforehand and I did no speedwork at all since Gold Coast - so I'm very happy that I ended up running as well as I did. Not much about the race was fun, though, and unless the weather gods can guarantee me a perfect sunny day next time, I am not particularly interested in running it again. Yeah, I'm getting PICKY in my old age.
Posted by Rachel at 11:46 PM