Last year this 10K was the scene of a tasty PR (almost a minute off my old one from 2007) and when an email arrived from the promoters announcing the race for 2012, it did not take much thought before I signed up. In doing so, I discovered that my time from 2011 earned me a seeded start! Would I like that? Of course I would!

But when the bib arrived with "STANTON" emblazoned across it, I had a moment of horror: all I could think was "but, but, but.....I suck at short distances!" If I crashed and burned, how embarrassing would that be, with a seeded bib on? Ugh. It did not bear thinking about, so I just put down my head and went on with my marathon training, which had become rather overwhelming of late.


The Training
Once again I was mid-way through a cycle of Pfitzinger marathon training, and the race probably could not have come at a worse time, sandwiched as it would be in the middle of 4 consecutive weeks of over 100 miles. I shifted all the heavier days to earlier in the week - running my 22 miler on Thursday morning starting at 4:25am - and attempted a taper of sorts, but even so had 95 miles on my legs already for the week going into race day.

Also, I was not reassured by the fact that I had struggled to hold pace under 6:20 minutes per mile in a recent tempo run; but what the heck, a child-free running trip (however short) is nothing to be turned down. So off to Sydney we went, since I had registered my husband for the race as well (oops).


The Travel
The location of this race - in and around the Olympic Park where the Sydney Games were held in 2000 - is absolutely fantastic. There are a number of hotels right there and I'm able to get a free night's accommodation at the nicest of them, setting us up for a lovely relaxing race prelude. 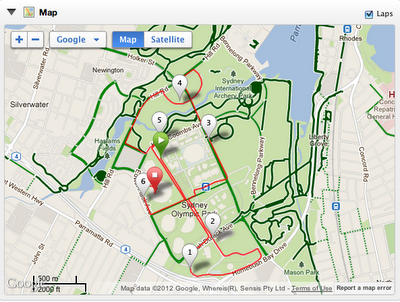 We fly out from Wagga in the afternoon, meander around the CBD shops and go to the movies (carb-loading on popcorn is perfectly acceptable for a 10K, right?), then make our way to the hotel where we enjoy a lovely meal in the on-site restaurant. Compared with my usual pre-race routine, which involves focusing enormous amounts of energy on the needs and demands of two small (but wild) children, this is pure bliss.


Race Day
Through our window on the 11th floor I can see the start line, and at 6:30am when I get up there are a lot of people already milling around down there. The forecast calls for clouds and16C/60F at the start, so I head out for a warm-up run at 7:15am dressed in shorts, singlet and a throw-away Gap sweater that I've had since 2007.

My legs feel better than they did yesterday, at least, but I'm still feeling far from zippy as I plod through my two miles. I'm trying to come up with an excuse to use in the event that I can't even break 40 minutes today, but nothing springs to mind. Better probably just to not think about it....and the irritating song my son has been making me listen to all week comes in very useful now: my mind goes blank and I just potter along humming its inane lyrics to myself.

The sun is starting to break through now, and although it probably won't be as warm as last year, I'm still way overdressed. So after my warm-up I shed both the sweater and singlet, re-pin my bib to my bra and head down to the starting line. On the way I down a vanilla GU (for luck as much as for anything else) and find a water fountain to wash it down with. There's a nice coolish breeze but the sun is warm; at the preferred/seeded runners' area I stand in the sunshine and it's really quite lovely. I make small talk with a couple of other women - some of it about how we're surrounded by blokes - as we stand about 4 rows back from the line, and then the gun goes off and ugh, time to try to run fast.


Mile 1: 5:58 (pace in min/mile)
Heading up the slight incline past the main stadium, I feel like I'm putting in quite a lot of effort. At the 1km mark I look at my Garmin and realise why: it reads 3:34, which is 5:44 min/mile. Ah, I can ease it back a bit then - and although I do, the next part is a gentle downhill and the first mile passes in sub-6:00 pace. Cool!


Mile 2: 6:00
Wow, I actually feel quite okay running at this pace. The second half of this mile is a gentle uphill back towards our hotel and although it feels tough, it's not unmanageable and again I'm pleasantly surprised when my Garmin beeps to inform me of my pace. The big question is: am I going to be able to hang on the whole way? Hmmm, I have no idea really.


Mile 3: 6:04
Halfway through this mostly flat mile I check my pace and it's still around 6:00. Impulsively, I make a decision: even though I suspect I'm going too fast, I'm definitely not going to slow down deliberately. I want to run at least the first 5K at this pace, and if that means I die in the second half, so be it. My 5K PR (only having raced, um, one) is pathetically soft and I feel I must improve on it even if nothing else comes out of today.

So, the 3rd mile goes past in similar fashion to the first two, and I hit the 5K mark in 18:47 by my watch. A much more respectable PR and I'm claiming it for sure!


Mile 4: 6:12
Small loss of focus here, possibly I relax a little after the 5K marker is behind me. It's starting to feel hard now, this level of effort, but it helps that I've only got 2 miles to go.


Mile 5: 6:03
Right at the start of this mile, I see a woman ahead of me with a dark ponytail and tan lines on her back that make me think she's probably a triathlete. It's hard to tell from behind, but there's something about her that is familiar.

I've picked up the pace a bit again, and soon I pull alongside, then pass her. I hear her grunt something and then she passes me back - we go on like this for most of the mile, although I'm deliberately not letting it phase me - I know there are plenty of other female runners ahead of me so it's not like we're duelling for an overall place or anything.

Finally there's a slight uphill stretch and I leave her behind. Immediately she's out of my mind because I have other issues to focus on: the memory of this final mile from last year, and it's not pretty.


Mile 6: 6:13
This is the part that goes on a gentle uphill past the main stadium, in full sun, before making a right hand turn and heading towards the final stretch into the stadium. Last year it sucked, and this year is no different. I'm passing quite a lot of men now, and a few are inspired to start sprinting to stay ahead of me - normally this would probably make me snigger and speed up more, but I'm too deep in my own head to pay much attention. 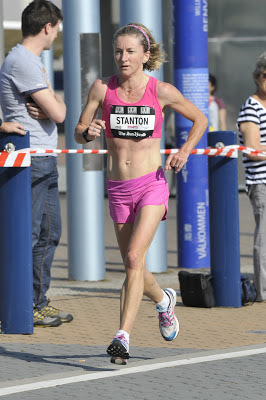 The two thoughts going around are "KEEP IT GOING" and "god, I'm never running a 10K ever again", and at the time I mean it. This is really hurting now - the slight downhill around the back of the stadium is a small relief, but I'm not surprised when my Garmin informs me I just ran my slowest mile of the race. At least the suffering is almost over.....

Finish: 5:54 (0.3 miles by Garmin)
Around the corner I go and into the tunnel that will bring me into the Olympic Stadium. There is a timing clock by the road and it has just clicked over to 37:00 - this is the boost I need to keep it going - there's no way I'm not going to PR now.

But the tunnel is longer than I remember it, somehow, and it feels like forever before I pop out into the sunshine and onto the grass. Thankfully the finish line is relatively close, so I put my head down and give it everything I've got --- and it's over at last.


Crossing the finish line, it's an exquisite relief to stop running and I grab some water, since I haven't drunk anything throughout the race. A very skinny woman in purple, whom I vaguely remember seeing ahead of me for much of the race, comes up and congratulates me on a strong run. She says "I just couldn't stay with you on that final uphill" -- I laugh and congratulate her back, but she's not the woman with the tan lines -- what happened to her? I'm standing in the bleachers watching for my husband to finish (he ends up with 46:09, a very respectable new PR) when suddenly I see her, and to my extreme surprise she waves and says "You got me again, Rachel!" WTF??

Turns out she is the woman I sledged in Port Macquarie last March (around mile 4 in the report) and whom I also beat in the F40-49 age group for this race last year. I remember now she asked me about the 2011 Run4Fun after the Port Mac HM - where I beat her for 3rd place - I'm becoming something of a nemesis for this poor woman, and I can't even remember her name!

The Analysis
Well, if I can run both 5K and 10K PRs in a race during the most intense marathon training I've ever done, I guess that has to be a good sign. And 6:00 pace, or at least sub-6:10, seems a lot more manageable than it ever has before. Suddenly the idea of a marathon at 6:30 pace doesn't seem the wildly insane idea it was about 7 weeks ago.....and the planets appear to be aligning for something special in Honolulu on December 9.