I moved to Wagga in 2007 and first ran it in 2009, finishing as 4th female in an unimpressive time that I won't immortalise here. In fact, that result was one of a few less-than-inspiring race times I posted in late 2009, and the combination was what set me on the course I have pursued since -- finally getting serious about training and about running to the best of my potential.

In 2010 I was training for NYC marathon and so I chose not to run that year. In 2011 I ran it almost completely untrained and managed to win, despite ending up in the medical tent immediately after crossing the line. And in 2012 I finally set that right by winning and not only remaining upright afterwards, but also setting a new female race record for the 9.5km Lake to Lagoon course. Yay me!


For reasons unknown, in 2013 the route was again changed and slightly lengthened to become a proper 10K - in effect the Lake to Lake, as it would now start and finish at Lake Albert. Since I live almost exactly one mile from the lake, this was a bonus for me and removed the need to figure out a way home from the Wiradjuri Lagoon in the middle of town where the race usually ends. Excellent!


The Training
I never had any doubt that I'd run again this year, unless injured of course, but I never gave much thought to how I'd fit it into my training schedule. In fact, in the weeks leading up to the race I was pretty much "off-plan" for the first time in a very, very long while - after running Gold Coast and then the Wagga Trail marathon, I found myself completely sick of formal training schedules. A few times I fully intended to write something up or work something out....but I simply never did.

To make matters worse I then signed up to run Melbourne marathon in mid-October as an elite, still without a training plan in place, and promptly began stressing out about my lack of proper long runs with only 5 weeks til the race. And so it came to pass that the very day before the Lake to Whatever, I set out to do 15 miles and ended up running 20 (that's 32.2km for the metric-minded) instead. Whoops, that might not have been the best idea I ever had! I spent the rest of the day resting (and refuelling) as much as I could, but I knew my legs would still be fatigued come Sunday morning.


Race Day
I take full advantage of the otherwise stupidly late start time of 10:30am to sleep late. Finally, at 7:30am I roll out of bed, make myself a light breakfast of raisin toast and coffee, and then I pretty much laze about the house until it's finally time to leave. At 9:45am I set out for a 2 mile warm-up jog that takes me through the local neighbourhood and eventually all the way down to the lake, where crowds are massing already. It's a beautiful morning with barely a cloud in the sky, and my guess is it's at least 65F/18C already. At least there's no wind.

Near the start I start bumping into the usual suspects: the fast guys including the winners of the past 2 years, and my trail marathon buddy Rob, who to my extreme surprise is standing behind a jogging stroller. "You're not pushing that are you??" I ask in amazement, but yes, he is, and there's a sturdy-looking preschooler comfortably ensconced in there as well. I wish him luck and tell him I hope he wins the stroller division, and head off to lurk near the starting line.

As usual there are a bunch of young boys lined up right in front, but this year I'm not hanging back - I haven't forgotten how tough it is getting past the kids when they take off like rockets and then die rapidly around the 200m mark. And Tony Abbott isn't there this year to slow me down, either: last night he was elected Prime Minister of the country, so I'm sure he's otherwise occupied. I make small talk with the guy next to me (he's wearing a Camelbak hydration pack! Is this overkill or is he really slow, and in that case what's he doing in the front row?) and try to ignore the dorky aerobics instructors trying to get me to warm up with them, and finally there is a very very slow countdown from 5........4..........3......2,1 and it's time to run.

Miles 1-2: 6:12, 6:25
As usual, all the kids sprint ahead like maniacs and then slow down dramatically. This year I'm ready for them and only have to bark out "Watch it!" to one boy as he goes past me in reverse. I glance at my watch about 1km in and the pace is sub-6:00, which is definitely way ambitious for me. Oops, slow it down - but then a chick with a long blonde ponytail shoots past and opens a lead of about 20m on me. I'm fine with this until Rob appears on my right, stroller and all, and does the same. This is not okay! I'm running sub-4:00min/km and he's pushing probably 60lbs of kid and stroller? No way.

The first mile split is a bit slower than I thought it would be, as we head along Lake Albert Rd and start the climb up towards the turn-around point. I was ready for this but it still sucks, and I know there won't be any relief until the 4km (2.5 mile) mark. I'm overtaking bunches of guys now but Blonde Ponytail is around 50m ahead and she's holding that lead despite the uphill. Damn it, I'm going to finish second in another local race! Nothing I can do about it though, and I doubt if I can catch her.

Miles 3-4: 6:15, 6:07
Into the downhill, by my calculations Blondie is about 30 seconds ahead. Between me and her are a couple of guys and Rob with his stroller, and the situation stays the same as we click off mile 3 at a more acceptable pace, then mile 4 as we hit the lakeside path and its minor undulations. I know this path so well - I run it at least 4 times a week - and I know there are some small inclines and technical parts coming up ahead. I've formed the ambition to at least catch Rob, even if Blondie remains out of my reach, and with that thought I manage to keep myself going at an appropriate speed, even if the thought to just give up and jog it in for 2nd place does keep popping into my mind.

Miles 5-6: 6:19, 6:19
We skirt along past the Golf Course and I'm noticeably gaining on Rob now, although Blondie is still well ahead. As the path goes steeply uphill behind the Boat Club, finally I get past him (and another guy) and now all I have to do is not get caught! Just over a mile left.... 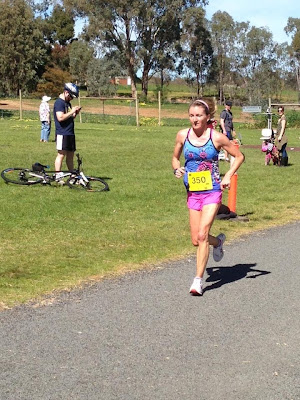 The sun is out in full force now and I'm reminded of last year's 11km race that followed this exact same course, but in temperatures probably 20F hotter - the last part was very uncomfortable, and today I feel similar. As we approach the final corner towards the park and finish line, I can see that Blondie is surging and the gap is noticeably bigger than it has been all race. I put on my best finishing kick - hearing the cheers of friends and spectators helps greatly - as I approach the finish at 5:57 pace.

As usual it's very pleasant to be able to stop running, and I've only just caught my breath and straightened up when Rob and his little passenger come charging across the line. Sub-40:00 with a stroller - now that's impressive! I thank him for motivating me to run my best, then spend the next half hour chatting to various running acquaintances whilst waiting for the presentation. Turns out none of last year's winners - or the year before - have triumphed today: Blonde Ponytail (whose name is Julia) is part of a posse of fast runners who have swept in and put us all to shame. I accept my medals for my AG and overall 2nd place, then jog gently home, mainly because I'm far too impatient to walk.

The Analysis
I could feel that 20 miler in my legs from about the start of mile 2 - if not for that, I probably would have been able to run a faster time. How much faster? Anybody's guess is as good as mine, but I'm fairly sure I still would have been the bridesmaid and not the bride. That's shaping up to be my theme for 2013, but at least I'm still out there trying! And once again the next female behind me was several minutes adrift, so I can take some consolation in that fact.

Next up: Melbourne marathon, brought to you by the WTF training plan. Can it get me a sub-2:50? It's going to be rather interesting finding out the answer to that question.....