I'm not entirely sure how this race got onto my radar, perhaps it was via the other Fairfax events in which I have participated, but somehow it came to pass in July that I signed myself up and not only that, I also secured myself a seeded/elite bib for the 14K race.

14km (8.7 miles) is a somewhat strange distance for a race, but it makes more sense when you consider that the famous City to Surf race in Sydney is 14km and it has become an iconic fun run that is in fact the biggest in the Southern Hemisphere. There are now various races in cities around Australia that imitate the City2Surf, and with the same sponsors coming on board in 2015 for the Canberra Times Fun Run (Fairfax and Westpac), it seems this is now our national capital's version.

Whatever the history or reasons behind the distance, we all know that when it comes to my racing style, longer is always better. My focus just now is on Melbourne marathon so again, I'm not sure how I ended up entering this race, but it seemed like a good idea at the time. I'm sure I've said that before, though.

Despite having run the infamous Wagga Trail Marathon only 2 weeks earlier, I had managed to ramp things up again over 80 miles (125km) the week prior to the Canberra race and between us Benita and I decided on a fairly minimal taper that ended up being only one day. Often circumstances dictate that I switch days around in the training schedule she sets for me, and since Fridays are often a day when I have more time, I ended up running 12 miles (18km) in the morning and another 5 (8km) in the evening for an impressive 17 miles less than 48 hours out from the race. Whoops, don't tell B about that.

The course starts quite close to Canberra Hospital, where I spent 6 months living and working in 2005. It's sort of nostalgic being back here, although I was still dealing with my broken leg and so not running much when I was last spending time in the area. On reflection perhaps I hate this place, but at least I know my way around.

I park behind the hospital at around 6:15am and set out for what is going to be my longest-ever pre-race warm up: 8 miles. Yes, you read that right. Coach B has suggested a long cool-down to get in the miles that I'd normally do on for a weekend long run, but I know I won't want to run that much after the race so I have made a calculated decision to get most of it in beforehand. Arriving to a start line with 8 miles already in my legs is probably not an ideal race strategy but then again, I have no idea what the field is going to be like today and am not really expecting to place very high.

I manage not to get lost (this is a big deal in Canberra) and 8 miles clicks over just as I get back to the car. I drop off my warm clothes for after the race and make my way to the start line where I find my fast friend Kelly; it seems there are only 7 or 8 of us with seeded bibs on, so we all line up right at the front and stand around joking and sandbagging until it's time to get serious.

The gun sounds and all the people around me tear off at high speed; despite my intentions it's impossible not to go with them. Kelly and Claire (in red shorts above, last year's winner) shoot out way ahead of me and by the 1km mark there are 2 other women also in front. 5th place? I could live with that - given how far I've already run today, it would probably be a great result - and since I've already had ideas about running this race at marathon pace, I settle back after the rather-too-fast first mile and clock off the next two right on target pace.

But during mile 3 something unexpected starts happening before my eyes: the two women ahead of me - one tall in a pink singlet, the other stocky and wearing a seeded bib - are visibly slowing down. I hold my pace and watch as they gradually fall back, wondering what to do. Then the stocky one drops right off the back of the other girl and before I know it, she's within overtaking range. Ooh, should I??

What a silly question, of course I should. I surge up alongside her and then sail right on by, inwardly cackling gleefully at having moved into 4th place. Miles 4 and 5 take us up Adelaide Avenue towards Parliament House - it's a great view as we approach and even better, a slight downhill that turns into a full-on one - it's not difficult to keep the faster pace going and wheeeee, now I've passed Pink Singlet as well! 3rd place? Yes please!

Mile 6, however, is not much fun at all. We make a couple of sharp turns and then it's uphill as the course takes us closer than I've ever been to Parliament House before. Everyone around me is clearly suffering and my own pace takes a nasty hit. Mile 6 beeps as I'm most of the way through the lap around the base of the building, and it's not good news: my slowest of the entire race. Oh well, there's the flag marking the 10K point so I look at my watch: 38:40, which is actually not bad!  And the best bit? There's only 4km to go. 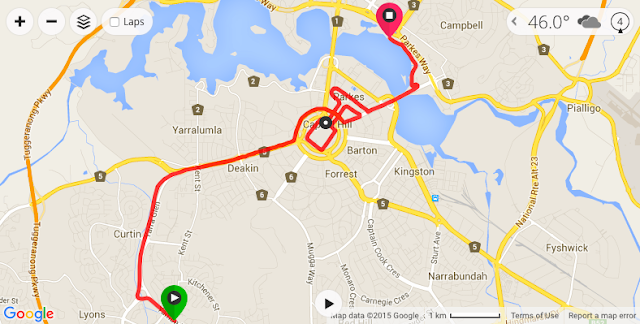 Back down from Parliament House I go zooming like a maniac and pretty soon we are heading towards Kings Avenue bridge. To my surprise I can see what appears to be the finish line just beside the lake - but isn't that too close? It's really quite strange, there's this enormous inflatable archway and a multitude of flags beside it, but it's clearly too soon to be the finish line and in any case there appears to be nobody around.

I resign myself to the fact that I'm not done yet, and am at least pleased to see that I've managed to speed back up again after that unpleasant mile around Parliament. Also it seems 3rd place really is going to be mine - this thought provides the motivation I need to get me over the bridge, through the deceptive archway and heading finally for the real finish. Hooray!

Ordinarily I quite like running around Lake Burley-Griffin - other than when the wind is blowing at 50mph directly in my face, of course - but right now I'd rather be elsewhere. More specifically, at the finish, which I can now see up ahead in the same area where the Mother's Day races start and end. I'd really quite like to just jog it in from here but then again I don't know how far behind me Pink Singlet and Stocky Girl are - they could be right on my tail but I'm not inclined to look around to check - so there's no option other than to grit my teeth and power onwards. And so it goes until I'm sprinting down the finish chute - there's a huge grin on my face, not just because I get to stop running now, but also because I've just earned a very unexpected appearance on the podium. What a thrill!


I look around for Kelly and am thrilled to find out that she has WON the whole race, and in fact was 4 whole minutes ahead of me. The days of my beating her (which I'm sure I did at the Mother's Day 10K a couple of years ago) are clearly well behind us! We set off for a cool-down jog together and I add on a little more afterwards to bring me up to a total of 20 miles for the day - even though it was fairly piecemeal, this will therefore count as the weekend's long run, which will satisfy my own OCD tendencies on this score.

It's a fairly long wait until the presentation gets underway - I am very glad of my warm jacket and also the large coffee that Kelly's husband kindly buys me while we stand around in the cold. Finally we are up there and I come away marginally richer and with a nice acrylic trophy to add to the cabinet. Cool!

Afterwards my friend Sonia picks me up and we head out to a much-needed brunch; I'm still quite amazed that I achieved the result I did and hopefully it bodes well for Melbourne - coming up quite soon - that I could run as fast as I did with 8 miles already on the legs.

And here's a gratuitous picture of the pancakes and peanut butter smoothie that made the whole adventure worthwhile - because refuelling is sometimes the best part of a race.