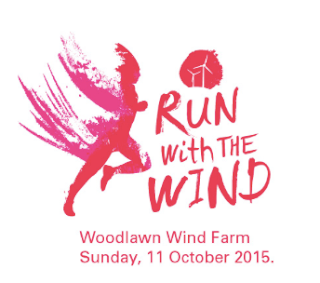 I saw an ad for this run once last year, I'm not sure if it was on Facebook or in a magazine or where, but I remember thinking how very cool it would be to run around in a wind farm - the enormous turbines whizzing around overhead - so when it popped up again a month or so ago I was quick to pounce. So what if it was just 7 days before Melbourne? What could possibly go wrong?

Since Joel has been in Australia it has also been a priority to travel for races, and since Jack ran his first 5K in Yass I had been on the lookout for another race for him to do. Run with The Wind fulfilled all of those requirements so I signed us up without a second thought. Plus, there would be some major prize money at stake for the 10K - and so it happened that I entered everyone (including Amelia) for the 5K and just myself for the 10, figuring that I *might* have a chance at some cash. If nobody younger or faster bothered to come, of course! Which is quite a big if, but still worth a shot.


The Training
I decided to run my final long run for Melbourne on Friday in order to give myself time to recover, and took things very easy on the Saturday beforehand as well. My plan going into the race was always to run a strong but not necessarily fast race; looking at the wind turbines that are visible from the highway between Wagga and Yass, Joel and I had already concluded that it was likely to be a hilly course. And the winning times from previous years backed this up: there was pretty much no way this was going to be a flat, fast course.


The Preparation
We head over to stay the night in Yass on Saturday; it's a pretty easy drive and everyone is having fun so far. Until we arrive at the hotel and I realise that the bag I very cleverly packed for the kids a whole day in advance has NOT made it into the car. Bugger!

I have pretty much decided to drive all the way home again and back (a task that will have me on the road until 11pm or so) until Joel talks me out of it; thankfully, his habit of packing way too much stuff has rubbed off on me somewhat and it turns out I have enough spare gear for both the kids. Jack has worn joggers and shorts that will go nicely with my Boston t-shirt, but Amelia is decked out in a flowing gown and platform sandals; this is quite a problem.

Through sheer luck I have left a spare running outfit - including shoes - in the back of our car and I have enough safety pins in my bag to pin a singlet and shorts so they will fit her. As for shoes, well, with 2 pairs of socks and the laces done up tight we discover that she can in fact safely wear my racing flats. I will have to wear my crappy old pink Mizunos, but so what, it's a miracle! Joel sends Amelia out to jog up and down the carpark just to check she's not going to trip and fall on her face, then we declare the problem solved and go out for dinner.

Early Sunday morning we are back on the road heading to the wind farm, which we soon realise is nowhere near the wind turbines we've seen so many times from the highway. The road meanders around in the middle of absolutely nowhere until finally we spot the turn-off to the farm - it is so hilly that the 88m tall turbines are almost all hidden from view until we get very close. Awesome! Time for a quick family pic before going off to investigate what lies in wait for us:


The 5K
There's a race briefing that mentions hills just in passing - but Joel arrives back from his warm-up looking aghast and tells a story of endless mountain ranges that essentially make up the whole of the course. We line up together and brace ourselves for it: the start is almost vertical and in fact makes Yass look practically flat. How is that even possible??

Everyone charges off up the hill when the starter fires his gun, but within about 100m many are walking. The kids make it to the top without stopping - although Amelia is quite a way behind - so I pause there and wait for her to catch up. There's a lovely downhill but it is very clear that no part of this run is actually going to be flat. As far as the eye can see, the hills just keep going - with enormous white turbines perched along the ridge where we are to run.


The second mile starts and I'm having quite a hard time keeping Amelia moving - Jack has disappeared in front, which is fine - when suddenly I see the leader heading back towards me. And who is this in second place? It's Joel! I'm so excited I don't know whether to scream or take a picture, because I know I probably can't do both at once - screams are momentary but a picture lasts forever - so I grab my phone and snap a shot before it's too late.


There's not much to say about the rest of what for me is a stop-start warmup run; the relentless hills are too much for both kids who are stopping to walk on most of the uphills. I catch Jack once and then again on the final hill: "Don't let me beat you!!" I yell at him and he takes off like a rabbit. Amelia is struggling with her shorts so we stop to re-pin them and she then jogs the whole rest of the course, finishing her first (but hopefully also hilliest) 5K ever!

Joel has finished 3rd - overtaken on the final hill by some young thing - every exciting but there's no time to talk because the briefing for the 10K is already underway. I don't bother to listen, really; it's just going to be a whole lot of talk about hills, isn't it? Instead I attempt a few strides and size up the competition: there are 4 young (in comparison to me, at least), fast-looking females lined up right at the front. Well, 5th place won't be a bad outcome then. Sigh.

Miles 1-3: 6:38, 7:59, 6:54 (pace in min/mile)
We set off downhill away from the start area and everyone is just FLOORING it: I glance at my Garmin after about half a mile and laugh when I see 6:09 pace. That's 3:49 min/km and pretty much normal 10K pace for me, but I know it won't last. We approach a turnaround and I count the women ahead of me - I'm in 9th position when the course turns and the inevitable long uphill begins. Let's see who went out too fast, shall we then?


By the time mile 2 has finished I have overtaken so many runners, quite a few of them women, that I don't know exactly where I am in the field now. At least one of the fasties who was raring to go at the start line is in fact WALKING when I approach her not long after we pass through the start/finish area and encounter that ridiculously steep section once again. Walking at mile 2 of a 10K - something I've never seen before, well except last week in Yass. Cough, cough.

I'm trying to count girls ahead of me and I think there are 3? So 4th, well that's not too bad! I spin my legs to make the most of the downhill that takes me out on the 5K loop again, and brace myself for the next up.


Miles 4-6.2: 7:11, 7:12, 7:07, 6:19 pace to the finish
There's another hairpin turn during mile 4 and I take the opportunity - whilst struggling up the hill to the turning point - to again count the females ahead of me. But one is missing! I could swear there were 3 but it seems there are only 2: a figure in a blue singlet that I thought was a chick is actually a teenage boy. Ooh! Could there be another unexpected podium appearance in my near future? The thought is enough to keep me feeling relatively cheerful despite the ongoing hideousness of the hills - a runner coming the other way tells me "You're 3rd lady!" and confirms what I thought - prize money could be mine! And all these hills might just be almost worth it.

Miles 5 takes me back towards the finish but there's one more out-and-back loop to conquer: the one that takes us up Giants' Hill. Aptly named, it's a bloody giant of a thing and I catch a few more people on its rugged slopes. The top takes forever to reach but finally I'm there and turn to find a long gap until the next runner behind me - I should be able to hold onto 3rd place, which is great!

I bomb back down the hill and make the turn onto the main road to find Joel and kids there screaming encouragement - I'm so focused on not falling off this ridiculously steep slope that it's all I can do to smile (briefly) and wave as I whizz past towards the line - and there you have it, a 10K race the weekend before a marathon.

What a successful day! Joel and I have placed exactly the same, again, and we both get cool medals and a bag of various stuff for our efforts. I am presented with a giant paper cheque and get to feel like an obese, elderly midget when I have to stand next to the winner, a very tall and thin young lady who is in fact 27 years my junior. No doubt she has an illustrious running career ahead of her, but I'm satisfied with how our day has unfolded: the kids have both run wonderfully well (Jack has in fact run 9 seconds faster than in Yass, and Amelia despite all the walking has placed 12th in her AG) and both Joel and I have something to show for our efforts.


The Analysis
I don't actually feel like I ever really ran at 10K pace or effort during this race - perhaps right at the start, but not for a sustained period of time at any stage. That's a good thing with regard to Melbourne, and perhaps today was a strength workout in disguise. Whatever it was, I just have to hope that it won't hurt my race in 7 days' time - and if it does, then at least it was worth it for the fun and unique experience we have all just had amongst the wind turbines.

To top it all off, we make it into the Canberra Times the very next day - hooray! 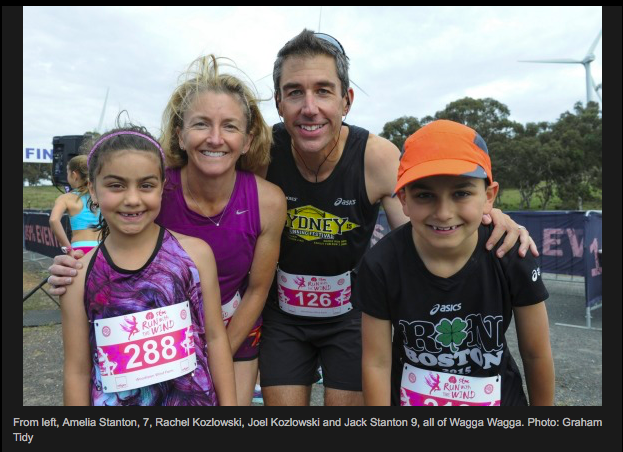