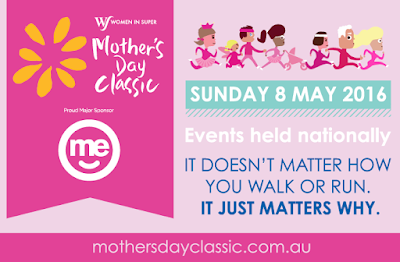 This race has become a tradition for me now and one that I felt bound to uphold, even with legs that were still not too impressed with what happened in Boston and toenails mostly now no longer with us. I have a nice array of trophies from the past 4 years of competition and a race PR from 2014 that I'm probably never going to beat, but that won't stop me from trying. To recap:

In the days leading up to Mother's Day the weather forecast was far from exciting - almost 100% chance of rain and decidedly cool temps - although the lack of wind made a pleasant potential change from previous years. Nevertheless, to Canberra we headed just under 3 weeks after Boston marathon, with Joel and myself signed up for the 10K and everybody (well, not Mum) doing the 5K. Wheee?

For reasons that are mostly unclear, I came out of the Boston marathon this year with feet and legs more trashed than I remember them being after any marathon I've ever run. This may be in part due to my notoriously spotty memory around this sort of thing - although it's pretty much photographic for most other things, to the extent that my husband calls me "Rain Man" when I am able to recite things like obscure passwords and usernames after seeing them only once - but from the lost toenail count alone, Boston was an outlier in terms of the physical damage it did to me this year.

So I pretty much begged Benita to give me at least a couple of weeks to recover, and only started back into any sort of training other than random jogging the same week as this race. I did some short intervals on Wednesday and was a bit surprised at the paces I managed to hit (they were faster than usual); B had suggested a tempo for Saturday and I had every intention of emailing her to discuss this but somehow never got around to it. I did figure that a 10K race would be the equivalent of a tempo run (or something) and thankfully she pretty much lets me do what I want these days, so there we go.

Pre-race Mexican food seemed to work well for me back in December, so we head back to Guzman and Gomez when we arrive in Canberra and scoff burritos and nachos like there's no tomorrow.


Both the kids seem enthused to run; after the whinge-fest we endured in April, there's no way I'm going to force Amelia to run and even less so if it's raining. I've warned them about the weather already but they insist they're up for it, so everyone retires early to rest up for the race.

At about 5am our day begins - inexplicably, because both children (in particular Amelia) are great at sleeping until at least 8am on  a school day - and around an hour later I've given up on the idea of anybody going back to sleep so I get up and make raisin toast for all. It's drizzling rain already at 7am when Joel and I head outside to jog to the start line; this is going to be wet and potentially quite miserable.

I've at least got a hat on, though, and I don't actually mind rain too much as long as it's not getting in my eyes. It's not as cold as I was expecting and there's barely a breath of wind, so perhaps this might be perfect running weather after all? Last night Joel and I were debating whether or not this course is a PR course, with my opinion firmly against (those bridges! two laps! the wind around the lake!), but I might need to reconsider this now.

We finish our 3 mile warm-up, spend an alarming amount of time lining up to drop off our stuff, and make it to the start line with just seconds to spare. The rain has picked up a bit and I'm deliberately not even thinking about whether or not I feel like running fast today; but then the gun goes off and I suppose I should give it a try.

It always happens but every time I'm still surprised at how so many people charge off at top speed; there are instantly at least 10 females ahead of me. Perhaps this is a super-fast field? But nobody looked particularly threatening before the start......I guess I'll find out soon enough. A couple of them are already behind me by the time we head up towards the Kings Ave bridge - right around the 1K mark (only 9 to go! run faster!) - and then the short uphill does most of the work for me: suddenly a group of no less than FIVE female runners is right ahead. I zig, I zag, and then I saunter right past the lot of them without breaking stride. Yes!

And as I head across the bridge, not even a mile into the race, the last two women ahead of me are also within reach. The dismount from the bridge used to be a debacle involving fences, 90 degree turns and a road crossing but now (after probably 2 years of construction work) it's a lovely smooth curving path that leads straight onto the lakeside path again, and by the time I'm zooming along it I'm in the lead. Quite randomly there's a person playing bagpipes in the shelter of one of the 2 bridges, and despite the ongoing dampness I'm now having quite a lot of fun! The lack of wind makes the trip along the lake much more bearable than last year and in no time I'm already tearing along towards the finish area to start my second lap.

There are only 4 blokes ahead of me and I could probably start jogging now I guess and possibly still win - but that's not my style and besides, I have no clue how far back those last 2 chicks are. And I'm having quite a lot of mental success with the strategy Benita has unwittingly planted in my mind, which is that this is just a 6 mile tempo run, so I really should keep going, and I do.

Not having anybody to chase is usually a predictor of slower race times, but it probably helps that I'm now lapping people and getting a lot of positive feedback as I pass. Also - I could have mentioned this a while ago I suppose - since the end of the first mile I've had my own bike spotter, and when I slow down during mile 4 she pulls a bit ahead, which makes me realise I'm slacking off and need to pay attention.

Catching up and then staying with the bike spotter provides the push I need to keep on going, plus she is actually doing a fair bit of work on this more-congested second lap, constantly ringing her bell and moving people to the side so as to vastly reduce the number of times I have to yell in order to get past. When we finally reach the narrow path that leads up to the finish precinct she nimbly clears the path forwards for me and then peels off to the side; I look up to see a tape stretched across the finish line and it's an extreme pleasure to run through it with arms aloft - well how about that, my first Canberra win!


The kids subsequently run the 5K and both set fantastic new PRs (27:33 for Jack and 31:44 for Amelia) despite the ongoing light rain - I'm so proud of them both and everyone is impressed with themselves really now. The weather hasn't been an issue at all, although it does mean there is literally NO crowd at all (other than the small one I've brought with myself) when I get my trophy for finishing in first place. Maybe we are all tougher than we realise?

Good grief, that's one of my fastest 10K efforts ever and in fact a course PR! I'm surprised and pleased all at once - it's great to be able to take advantage of recent marathon training - and it's also a good sign that perhaps I'm not so far over the hill as I thought. What's even better is that I never felt too stretched during the run, although perhaps I could have focused a little better and not lost as much time on the second lap. But overall it was a satisfying run and a pleasant wind-free race experience! And a good mental boost for the busy racing season that lies ahead.