I'm currently in a sort of hiatus from training, which means I'm not really doing long runs at all, which in turn means that this is the perfect opportunity to run some shorter races. Um, well it makes perfect sense to me, at least.

My top end speed is fairly hopeless but it's slightly less hopeless when my legs aren't dead from pumping out 90 miles a week, and Albury is just over an hour's drive from our house so when I heard about this run, it seemed like a good excuse for a road trip. There was also the somewhat unexpected lure of significant prize money for the top 3 finishers; as we all know, it only takes one speedy young thing to ruin my day, but sometimes they just don't show up. In any case, this is a brand new race and I did think that it might not attract an enormous crowd, so perhaps I might get lucky. And who could turn down a chance to run from one pub to another (even first thing in the morning)?

In keeping with my current casual attitude, I did absolutely nothing particular in the way of training for this race, other than a short easy run the day beforehand. This includes speed work (nope), long runs (none) and specific race-pace training (nada). Just 10 or so miles per day, whatever I could fit in, at whatever pace I felt like running at the time. The Whatever Training Plan - you read about it here first.

It's a perfect day but alarmingly warm already when we set out from home for the easy, back-roads drive to Lavington where the race begins. Pulling up in the carpark behind the Springdale Tavern I am slightly dismayed to see a small red car pulling out and no other than my fast young friend Claire waving cheerfully at me from the front seat. Well, there goes first place, not that I seriously though I could win this race anyway. Sigh.

We jog a 3 mile warm-up and arrive back to the carpark where quite a lot of people are now milling around and taking shelter from the sun under the awning of the building next door (a discount chemist). Joel is busy freaking me out by pointing out fit-looking 20-somethings who might be capable of beating me: what about her? Or her? Or her?? Oooh, she looks fast! We count at least 4 of them and yep, it's official: I'm screwed.

The course is point-to-point (or pub-to-pub more accurately) so in theory we could just treat it as a Sunday long run: jog there and then back to the start once we're done. I raise this as a possibility and Joel falls over laughing - ok, scratch that idea. I'm too lazy right now and in any case by that time the temperature will be around 35C, and neither of us feels like melting to death today.


Before long we're called out and lining up on the road in front of the tavern - there's no actual starting mat so getting up the front is going to be important - I end up in the second row just behind Claire and with all the other fast-looking young things close by. The sun is beating down and it's time to do this: I'll just think of it as a tempo run and hope it doesn't suck too much.

Immediately all 4 of the women I figure are likely to beat me go streaking out in front. I expected this so I focus on my own effort level and try not to worry about pace just yet. I'm assisted in this endeavour by a distracting bloke in a red singlet bearing the words "Riverina Podiatry" who is somehow managing to goof around while running seriously fast; he's taking photos and running backwards, all the time chatting happily with at least 3 others around us (or at least talking at them - none are doing much in the way of replying) who are wearing the same top. That's him closest to the curb below, with his fast-chick teammate beside him:

Fairly quickly I leave the girl in pink behind me, but Claire is well ahead with the two others - numbers 80 and 87, henceforth to be known as the one in Black and the one in Red. As the first mile progresses a gap opens, with Claire and Red at the front and the other girl closer to me. I'm feeling reasonably good and maintaining what for me is a pretty decent pace as well. I won't speed up - mostly because I can't, but also because I know that most people in these shorter races do tend to go out too fast - and patience pays off as we pass through a large intersection right at the end of mile 1 and head up a long, slight uphill stretch. The One in Black slows down markedly and I catch her (as well as another male runner just near her) with ease. Excellent, 3rd place is now mine!

Her boyfriend is by the road in at least 2 spots over the next mile, though, waiting to cheer her on and take photos, and I'm trying to gauge from his reactions how far back she is. Probably not too close - in any case I need to forget her and focus on what's ahead. We pass under the highway via a couple of short tunnels; I'm checking my Garmin to make sure it hasn't freaked out yet again and then I pop out onto a long, straight bike path. I can see far enough ahead to figure out that I'm in 7th spot overall and the One in Red is, quite incredibly, only just behind the male leader. Wow, she's way out of my league. Perhaps 3rd is really the best I can hope for in terms of placement, but at least I'll still be in the money, and that's good enough for me.

During mile 3, however, I'm surprised to find myself gradually inching closer and closer to Claire. She has been injured this year and although she definitely has more natural speed than me, I'm not at all certain how fit she is right now or how much she has been training. I've caught her in the past couple of races we have both been in, despite having trailed for at least the first 5km - endurance has always been my strong suit and today it's my only hope.

Pounding along this open, exposed bike track next to the Hume highway is starting to get rather uncomfortable; it's seriously hot now and I hate running this fast, really I do. In mile 4 I lose focus and a few seconds but even so, I'm closing on Claire for sure now. Finally as mile 4 ends I find myself within striking distance, so I surge forward and officially move into second place. Hooray!

I'm inspired by this turn of events to turn up the effort level ever so slightly, and there's a young guy not far ahead who becomes my next target.


I reel him in gradually during mile 5 and manage to pass him just as we go by a sign that is directing "disabled and people with strollers" to the right. I'm vaguely wondering why this is necessary when Young Guy - clearly miffed at being passed by a chick, not to mention an old one - powers past me again.

And then I see why: we're directed now to the right as well, and rather than going under the highway as we did earlier in the race, this time we are going OVER it. Yes, over. I find myself gazing at two steep flights of stairs that lead to a bridge like this:


This was not in the course description! I'm not keen but I guess I have no choice - up and over I go. Mental images of tripping on the way down and breaking multiple teeth or perhaps bones flash through my head as I cross the bridge; as a result I slow down significantly on the descent and my final mile split definitely reflects it.

As I complete the final, slightly convoluted part of the course I'm counting mindlessly in my head because I'm seriously overheating - I've been running at top speed for over half an hour in full sun now - and completely ready to stop. Crossing under the finish arch is such a relief! I remember now why I hate short races so much, but at least the pain doesn't last as long.


I grab a cup of water from a helpful volunteer and take shelter in the shade of the drive through bottle shop where the male winner and 3rd place are also standing. We chat briefly and then Joel appears -- he has finished 10th overall and definitely fastest in his age group!

Later at the "presentations" it's a bit disappointing to find that other than a cash prize I get nothing, but cash is more than enough and there is beer and chips to go with it, so who can complain, really? 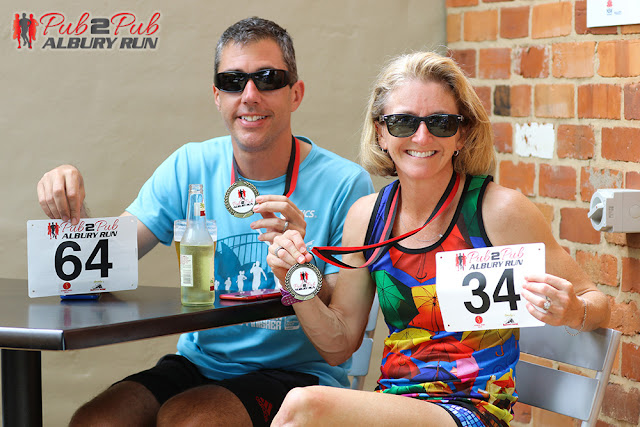 There's not much more to say about this race; I still don't like shorter races and although I seem to perform well in the heat, there's nothing much fun about running fast when you feel like you're about to melt. There's nothing else on the racing calendar for me in the immediate future, and for once that's just the way I like it. Aahhhh.