I've run 4 marathons now and probably close to 20 HMs, but until last weekend I had never raced a 5K. It just never seemed LONG enough - like why bother getting all dressed up and nervous if you're going to stop after just 20 minutes? - and I have to admit that being told over and over by various RW friends how much a 5K hurts/sucks did nothing to inspire me to sign up for one anytime soon.

However! After Boston I got curious as to how fast I really could run a much, much shorter race. The McMillan running calculator said "18:17", which seemed VERY fast to me, and now I was definitely interested to see what I could do. So I signed up for the Mother's Day Classic in Canberra. I have run the MDC many years ago in Sydney but it was either an 8K or 10K (I think I ran it in 2001 and 2006) and the second time I was 26 weeks pregnant with my son, so it was hardly a speedy time. 2012 seemed like a good opportunity to improve.

The training
After Boston I took a very, very easy week of mostly no running, and then started following a Pfitzinger Multiple Marathoning plan. My next goal race - the Gold Coast marathon - being just 11 weeks after Boston made things tight, but within 2 weeks I was running over 50mpw again and feeling good.

The week of the 5K I ran my LR on Thursday (18 miles) and then did a mini-taper of 10 and 7 miles the two days leading up to it. I still hit my weekly total of 71 miles but felt relatively rested at the same time.

The travel
Um, considerably less exciting and involved than many of my previous races. The kids and I piled into the Volvo on Saturday afternoon and drove over quite comfortably, with a pit-stop at McDonalds for an early dinner. We stayed at our usual digs and I got them into bed with minimal fuss by 8:30pm, then settled in at 9pm for an early sleep.

Race Day
I wake at 6:30am to the sound of hysterical laughter from the room next door and realise the kids are already up. We all eat raisin toast, I drink a coffee and then it's off to drop them at my wonderful friend Sonia's house to play with their great friends there - and I enjoy the extreme lack of noise in the car on the way to the race. I realise quite suddenly that I'm actually REALLY nervous, much more so than before any marathon, and that seems utterly ridiculous.

It's cold and grey by Lake Burley Griffin when I arrive, but not windy - until I walk down onto the lakeside path to start my warm-up lap in the wake of the 10K runners (who are doing 2 laps of the 5K course). Brrrrrr, down by the lake it's freezing, and the wind is howling out of the southwest, which is fairly normal for Canberra but not exactly optimal for a fast 5K debut. 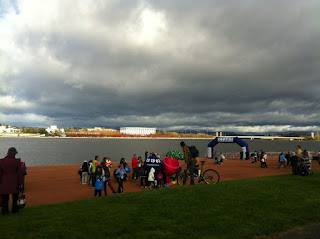 I run a lazy lap of the course, trying to keep the pace slow. Halfway around I get passed by the male 10K leader on his second lap. It's a BIG struggle not to speed up and go with him, but I resist! Back at the start I shed my jacket and gloves, and head back down to the lake. My imaginary running friend Ewen, who lives in Canberra, shows up and easily recognises me (although we've never met before) close to the starting line. We chat for a bit and then I go back to feeling nervous.

I soon spot two women who look like they might be pretty fast. One is YOUNG - maybe 22 - and the other might be 30, I'm not sure. Anyway, I jump twitchily in place for a bit, then the gun goes off and wheeeeee we're running!

Right on target and it doesn't feel too hard yet. Immediately the other two are ahead of me and I am in 3rd place. I focus on not going TOO fast yet and the pace feels okay. However, I have forgotten about the tailwind - as soon as we turn up onto the first bridge there's a STRONG cross-breeze. Ooh. 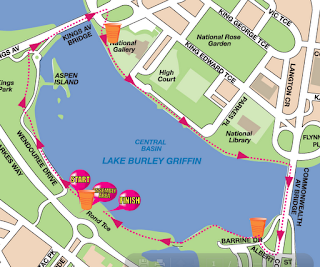 
Mile 2 - 6:20
Ooh turns to urgh. Turning off the bridge takes us along in front of the National Gallery, High Court and National Library. We are right down by the lake and the wind is BRUTAL - freezing cold, 20+mph and right in my face. There is nobody around to draft off. The effort feels similar to the first mile but when my Garmin beeps I look at it and think OH CRAP. That was way too slow. Still, both the women ahead of me are still in sight. If I can hold on one more mile I'll come 3rd.....

Mile 3 - 6:13
The cruel wind stretch is followed by a cruel and steep uphill onto the second bridge. The uphill continues to the crest of the bridge and I suddenly am MUCH closer to 2nd place than before. However the combination of wind and hill has done a number on my head: I've decided that 1) I hate this, and 2) I'm racing for place now, and overall time can go screw itself. I keep it going but I know I won't be catching up to 2nd lady.

Final 0.1 - 5:43 pace
A gentle uphill (noooo) and then a finish chute over grass. I look up to see 19:xx on the clock and am again amazed at how slow I ran compared with the effort I feel I have been putting out. But whatever, I have just finished 3rd in my first 5K! In the excitement of giving my name to the officials who now come over, I forget to press stop on my Garmin. Duh.

19:17 is my official time, just 16 seconds behind the female winner, and 13th place overall.

While I'm talking to Ewen (who has been taking video of the finish) suddenly I hear "Mummy!!!" and two small people are firmly attached to my legs. We hang around for the presentation, I get a nice trophy that is immediately confiscated, and that's that! 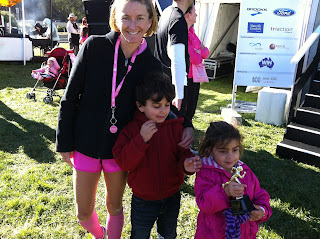 I never did get it back yet

The analysis
I might be able to run a 2:58 marathon now, but I'm clearly out of my depth with the 5K. I have no idea how it's supposed to feel and I've done almost zero speedwork specific to this distance in the past, um, 12 years? Sure, 19:17 is a good time, but I suspect I'm capable of better. I don't think 19:17 would have gotten me 3rd place in many 5K races.

The main problem is that I'm still very much focused on marathon training right now - and I don't know when that is going to end. However, I am sure of one thing: I NEED TO DO BETTER! So more 5Ks are most definitely in my future.....stay tuned.