The Sydney Morning Herald half is one of my favourite races and, in 2001, was the first HM I ever ran. I finished in 1:26:24 and was training hard to beat that time in 2002 when I was blown off the map by my accident. Then, in 2010 this race was my first HM where I managed to creep back under 1:30 after my post-second-baby slump.

I didn't crack it by much, though - the course that year was a 2-lap affair with a nasty hill right near the end, and it totally slowed me down the second time I had to run up it - but for 2012 a new, single-lap course had been introduced and once again I was able to get preferred runner status. So I was excited to be able to line up for another try in 2012 - especially on the back of my recent running form. 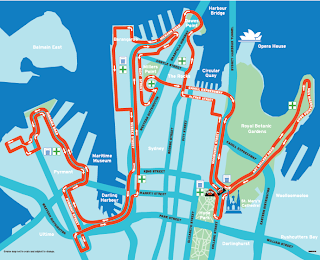 The training
I really didn't make many changes to my current marathon training plan, other than to shift the long run earlier in the week and run a very short (4 miles) run the day before the race. I still hit my weekly total of 74 miles (119km) but felt relatively rested for the race, which was a relief.

The travel
Ooh, the excitement when I decided I wasn't up for 10 hours of driving and instead took the kids by plane to Sydney. We lobbed in early on Friday afternoon, hopped on the train and hit the (tiny) expo. I had already decided on my race outfit - a departure from my usual pink, I was going to wear my lucky/skimpy Boston outfit and the hideous orange/red shirt I bought to make up for the fact that the Boston 2012 jacket was too awful to waste money on - but this did not stop me from buying a very cute new running skirt there, um, just because.

Race Day
Pop comes over to stay the night before - since DH and I are both running the race - and so I end up sharing a bed with my daughter, who kicks and wakes me at various intervals in between the times when I wake up just because I'm wired. I give up at 4:30am and sneak out to eat a banana, drink some coffee and generally try to wake up.

Strangely for me, I find I'm not in the mood to race. There's a stupid, negative voice in my head that is saying "Blah blah, I can't be bothered with this". I realise pretty swiftly that last weekend's 5K has done a number on my confidence - even though I placed well, it was a far slower time than I *should* be able to run - and as a result I'm doubting myself and wanting to just hide and forget about racing.

Well, this won't do at all. I give that voice a stern talking-to and then retreat to my usual pre-race state of denial, where I'm just off for a lovely run and whatever time I manage will do just fine. Shortly after 6am we leave the apartment and join a stream of runners heading over to Hyde Park, and by 6:20 I'm warming up in the seeded/preferred runners area in front of the start.

There I spot a familiar face and realise it's Keith Bateman, a world-class Australian Masters runner who was profiled in last month's Australian Runners World magazine - in an article about getting faster with age, something that is right up my alley! I go over to say hi and get accosted by a tall skinny bloke who is standing with him. Tall skinny bloke starts telling me that the secret to running better over 40 years of age is to run BAREFOOT! Yes!! You MUST do it! It's the WAY!!! He's up to 10K already! He has a rather scary, wild-eyed look and I back away slowly, nodding politely and smiling, saying OK! I will! I'll try soon! But oh - I don't live in Sydney - ok bye.....

It's cold (9C/48F) but once I'm wedged in amongst the rest of my starting group I don't feel too bad. After a whole lot of shuffling back - they haven't left enough space for all the preferred and seeded runners, somehow - the gun goes off and we shuffle forwards instead, and yay! We're running!

Off we storm down Macquarie St and past Circular Quay. It's all downhill and I feel GREAT! Until I look at my watch and realise OOPS! I am going out way too fast! Didn't I learn yet not to do that? Conscious effort slows me down for the next two miles, during which Tonz from RW's 3:20 thread cruises gently past me. He scolds me for not wearing pink, saying he didn't recognise me without it, and asks how I'm feeling. I'm actually worrying stupidly that I've somehow screwed up the whole race with that one too-fast first mile, but I say "Ok I think..." and he disappears amongst the runners ahead.

We're running along right next to the Harbour now and there's a bit of wind, but nothing dramatic. I've settled into a good rhythm that is only slightly disrupted by the first of quite a few little ups and downs that we take as we run through Pyrmont. There are runners coming the other way at one point and I see the leading female, who looks more like a bloke, and the girl in second place. She looks like a tiny, blonde pixie. I'm not about to pressure myself by counting how many women are ahead of me, so I focus on lengthening my stride and staying relaxed.

Somewhere in here I realise that for a mile or two I've been trading spots with another female runner. She's wearing blue and - although it pains me to say this - looks like she's probably in my age group. She's fast, though, and she keeps pulling back ahead of me when I pass her. I decide my mission in this race will be to beat her. We go on like this for another mile until she slows down to get water - and I pounce on my chance to drop her. I don't see her again (until after the finish) and the whole process is a great mental boost.

Then around mile 10 something hilarious happens. We run over the Cahill expressway and exit onto Macquarie Street (once again) and in doing so I pass a bloke who sounds to be working pretty hard. He gasps in my ear "First chick??" as I move ahead of him, and it's all I can do not to fall over laughing. He really thinks he's that close to the leaders?? I gasp back "No!! But.....thanks!" and then we hit the uphill.....and he's gone. 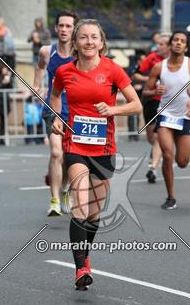 Well, I guess I DO look quite relaxed

It's tough heading back up Macquarie Street and I know this will be one of the slower miles, but then we crest the hill and I see the finish. The 3rd male has just run a 1:08 - but we have to loop right down to Lady Macquarie's Chair and back up past the Art Gallery. Ugh. I know this bit is going to be hard, but at least I'm still on pace. And there's a downhill - wheee! The blokey leading female goes past on her way back up and wow, she does NOT look happy. Tiny Pixie is gaining on her...

Slogging back up the hill from the harbour, I'm not thinking much other than that I'm almost there. I deliberately haven't looked at my overall time even once since the 10K mark, so I really have no idea what the clock is going to show when I make that final turn into the park. I'm guessing 1:24:xx, so I'm gunning for the line like a crazy maniac when I look up and it says 1:23.

Right across the line I find Tonz, who has just run a new PR of 1:21:17 and is standing there looking sweaty and happy. Blue Woman shows up - she's finished 45 seconds behind me and like almost everyone I know in Australia who is a serious runner, is going for sub-3 at Gold Coast in July - so we all congratulate each other and say "see you there!" I take off running pretty quickly in order to get back to the hotel, pick up kids & Pop and get back in time to see DH finish in a very respectable 1:56:44, which is amazing considering he's never run more than about 10 miles in his life before. 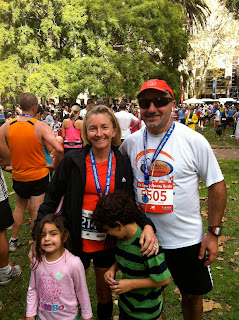 
I never would have thought I'd be taking more than 2 minutes off my old PR at the age of 42, and more than 11 years after I set it. It's all a testimony to the power of RUN MORE, really, and there's nothing more to it. And it feels great!

Not very long ago I told a friend that once I broke 3 hours for the marathon, all my running ambitions would be fulfilled and I wouldn't be thinking or trying to further improve my time significantly. But here I am, doing just that, and wondering if I have 2:55:xx in me for Gold Coast after all. It's a bold goal, and a lot of that pressure stuff I don't like, but why not aim high?

And although I've now lined up my HM best time with my marathon ambitions, the matter of my ridiculously soft 5K and 10K PRs remains - I've never been one to enjoy frequent racing, but something has changed in my brain this year, and I know that I have plenty to work on even if I decide to take a break from marathoning. So many races, so little time!