It seems like Fairfax Events have now set up the City Run Series: a whole set of races in the major cities of Australia, although the first (and still by far the most popular) was the City2Surf in Sydney - my very first race, in fact, after taking up regular running at age 29.

14km/8.7 miles is an odd distance, and in fact there are 10K and 5K options as well on the day, but as we all know I do much better with longer races, so there's never any question as to which race I will enter. Plus, I won a free entry by finishing 3rd last year! Who cares that it's only 2 weeks removed from the notoriously vicious Wagga Trail marathon? What could possibly go wrong?

In classic Rachel-raceaholic style, I've also managed to schedule this race for the end of my first week of official training for the Ned Kelly 50K in October. There has been so much tapering and recovering going on lately that I'm thoroughly sick of it and determined to just train right through. I'm sure this will mean a less-than-satisfactory result in the 14K but whatever, I don't care.

Last year I ran 8 miles (12km) as a warm-up because I was doing the race as part of my long run, but this year I'm trying a different approach: I'm doing my weekly long run on Friday morning instead. That will give me a full 48 hours to recover before the race in Canberra and hopefully that will be enough.

Friday comes and it's all going perfectly well until mile 11 of my planned 21, when apropos of nothing I catch my left toe on the asphalt and BAM - a millisecond later I'm on the ground with blood pouring from both palms and several fingertips which have been suddenly stripped of their skin. Oh, god, this is just what I need. I stand gasping by the side of the road for a few minutes, trying without success to stem the bleeding, deciding what to do.


It's only my hands - if my knees were the main areas of injury then the effect on Sunday's race would probably be far greater - but the shock and dismay, not to mention the time that it will take to clean up and bandage all these abrasions, is considerable. I'm supposed to run a few miles around 50K pace during this long run, but I'm too shaken to do that just now; on the other hand I'm determined to get something out of this run so I jog/bleed my way onwards to a total of 20 miles (32km) for the morning. What a debacle. 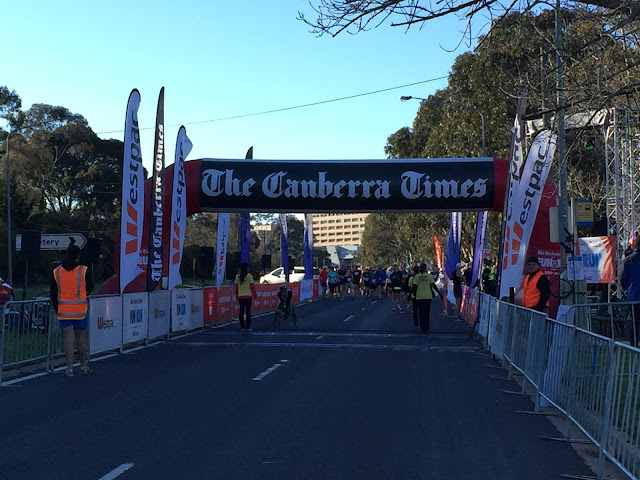 The weather is perfect - yesterday's wind and rain has completely disappeared - when I arrive at the start area with my friends Scotty and Claire; Claire and her friend Madi are running in costume today and raising funds for the Butterfly Foundation, which is pretty darn cool.

This year there's an elite tent to which we all have access, but it's barely set up, the water for coffee etc is not even warm and the space heater they have at the entrance isn't working. Initially I feel fine and not too cold, but after a few minutes in the tent I'm freezing so I decide to set off for a warm-up jog - wearing basically all the clothing I've brought with me, including my puffy jacket. After 2 miles I'm by no means overheated, but I've worked up enough warmth to see me through to the start, thank goodness.

I spot Nigel in the starting corral and wander over to say hi; he has a modest goal of sub-60 minutes which I am fairly certain he will crush. For myself I'm really not sure - not too much slower than last year is probably the best I can hope for. Pretty soon it's time to get in position and I clown around with Claire and the others, posing for the cameras and generally trying to top last year's starting line photo (see top of this post), although that's a pretty big ask since it's one of my all-time favourites.

Right there when at last the announcer is counting down from 15 seconds, the inflatable arch chooses this moment to lose interest and abruptly starts to sag right above my head! I reach up and prop it up with my finger; somehow someone saves it from complete collapse but it does make for a funny scene as we all dash away from the drooping arch:

We streak out of the starting corral like a bunch of maniacs and Claire, in full Superwoman regalia, is very quickly in front of me. Another girl wearing black and pink is between us and okay, so it looks like today might not be quite the slam-dunk I imagined it might. The first mile is flat but then the gradual rise towards the city and, eventually, Parliament House starts to bite.

My legs are not yet fully recovered from the Trail marathon and whoops, I ran 20 miles just 48 hours ago. Did I mention that? So although I'm trying my best, my legs just don't have the power to maintain the same pace on any sort of incline, and as a result I've lost my usual uphill advantage. Although I've managed to catch the pink/black-wearing chick by the start of mile 2, Claire is still ahead and despite having been injured a lot this year (poor thing) in fact she's looking strong. Well, maybe it's partly the outfit. But she's still up there and I need to keep pushing to make sure I stay in touch.

Finally just around the 5K mark the events of the year start catching up to her and I ease up alongside her, then past. Okay, I'm in the lead now, but my chickens are not even close to being counted yet - there's still quite a way to go. And how embarrassing would it be to win in a pathetic time? No matter how much I'd like to cruise this race, I'm not going to. Onward.

Mile 4 sees the crest of the hill finally reached and the course swings left and on a swooping downhill around the side of Capital Hill. Wheee! Without the upward gradient I feel much better and soon my legs are spinning comfortably and I've caught up to a group of blokes, some of whom seem to be struggling a bit. I'm vaguely considering this for a while but then one of them does something rather inexcusable: just a few meters ahead of me and slightly to my right, he turns his head to the left and blows out a massive snot rocket. Ugh!

The actual rocket doesn't hit me but the fine mist of nasal secretions that accompanies it does - it spreads itself disgustingly over my bare knees and I let out an involuntary yelp "HEY!" He better not do that again while I am still within range. Perhaps he's mortified (I hope so) because he accelerates now and I never catch up again.


Mile 6 is the nasty one I've been waiting for - it takes me up to and around the perimeter of Parliament House. I've run this loop so many times but it never seems easy, and this time with my beaten-up legs it's even worse than usual. I'm trying to figure out the geometry of how it can be uphill the entire way around (certainly that should not be possible) and this mental exercise at least keeps me occupied until I'm almost all the way around. I glance at my watch as I pass the 10K banner at the final corner of the building - 39:xx, which is not as fast as it should be but whatever, I'm winning so who cares.

It's lovely to finally be heading downhill again! What's even better is that the finish line is not that far away now - the beauty of these shorter races, although they do hurt marginally more than the longer ones - and I've run this particular course back to the lake so often now that it's comfortingly familiar. As I make my way across the Kings Avenue bridge and onwards around the north side of Lake Burley Griffin it really does seem like I'm about to win this thing; proving once again that it's all about who shows up on the day!

I'd like to be able to say that I speed along the lake in a blaze of glory but in fact I slow down a bit, not out of complacency but more because my legs are insisting on it; still it's enough and in stark contrast to the minimalist finishes I'm used to enduring in this location, I see as I approach that a pair of volunteers are holding up a finishing tape that I am going to take great pleasure in breaking. Hooray, finally a bit of recognition!


The excitement of breaking the tape and subsequently being interviewed on camera has completely made up for the discomfort of racing 14km on rather tired legs; the sun is shining on the lake, the sky is blue and very soon I'm feeling very pleased with how this day is turning out. Claire takes 3rd female and then I spot Nigel, who has smashed out a 58:04 to completely crush his goal - all very impressive!


Well, that was sort of fun, in a masochistic sort of a way. If training for ultras means getting used to running fast on tired legs, then today was an excellent training session. I'm not entirely impressed with my time but in light of Friday's mileage and events, it will certainly do. And just in case you thought I was going to give my legs a chance to catch up, I've got another short race planned next weekend. Let's call it ultra training and leave it at that!