The reborn Lake to Lagoon! One of my favourite races - I've run it every year since 2011 and won it 3 of those times - it's a bit of a nasty course with a rather long hill in the first half, but I love it just the same. Originally when I moved to Wagga it started at Lake Albert and finished in the centre of town by the Lagoon (hence the name, very original) but a couple of years ago it was rerouted and now finishes back by the lake at Apex Park. For me this is extremely convenient - I can jog to the start as part of my warm-up, and then home again afterwards (more of a crawl really) if I have to.

I will freely admit that the only reason I am including this sub-heading in this particular post is because I have put it in every other post on the blog, not because I did any actual 10K-type training in the lead-up to this race. As I had done the previous week, in the 7 days preceding this race I ran my long run on Friday (this time mercifully without any faceplants into the asphalt) and due to a combination of laziness and an Act of God (see below) I ended up running a paltry 5km on Saturday. Because on Saturday morning when I finally made it out of bed, my plans to hit the treadmill were derailed by the sight of this in our street:


I was far too busy figuring out what was going to potentially float away (mercifully, nothing much) to worry about running, and in this way the flash flood actually came in sort of handy as a mini-taper. It would have other implications for the race itself, however.

The late start (10:30am for the runners) means I'm able to spend a lazy morning getting ready and at 9:30am I set off with Jack - who is participating in the event as a bike rider - to jog to the start line. The sun is out and it's a gorgeous day; you'd never know that just 24 hours ago most of the suburb was underwater. Jack sets off and I go for my warm-up towards the northern end of the lake; before long it's already time to line up.

Remembering previous years and the usual horde of sprinters who will fade within minutes, I make sure to secure myself a spot right in the first row  - and looking around on the starting line there are a few coltish young girls who will surely be in that group; otherwise there doesn't seem to be much in the way of competition around. Yet. Hmmm.

I'm reminding myself not to count my chickens before they're hatched - I see Amanda, who was 2nd behind me in Canberra last weekend, and go over to say hi - and sure enough at the last minute I look to my right and hmm, there's a woman there who looks like she might be a contender. This is about to get interesting! I spent the dorky warm-up routine sneakily trying to size her up and decide that my only hope is that she doesn't have endurance because I'm fairly sure she's going to have speed.

My assumption about her abilities comes mostly from the fact that she has the powerful, strong-looking build of your typical shorter distance (5K, 10K) speedster whereas by contrast (and partly also due to my gait) I am very much built for endurance, not speed. My natural build is somewhere between mesomorph and ectomorph but unless I start lifting weights - which I haven't done for at least 3 years now - I tend to sit more on the endomorph side of the spectrum.

This is great for marathons (and ultras) but also means my 8 year old daughter can already beat me at a 100m sprint, meaning I have zero short-distance speed. So if this chick is as fast as she looks, my only hope is my endurance - and that she can't match it - because there's no other way I'll be winning again today.

Zoom! Off we all go in a mad rush and at least 3 of the teenage girls are instantly ahead of me - I can wait for them to tire but what's this to my right? Sure enough the chick in the white singlet (later I will discover that her name is Erin) is already pulling out in front and looks very comfortable when you consider the pace we're running.

Already by the end of the first mile the teens and tweens are all slowing right down but Erin is maintaining a gap of around 10-15 seconds ahead of me; a couple of times I think she's slowing down too but nope, even as we start the long uphill section on Lake Albert Road she just keeps on going.

Part of me is rather annoyed - I really wasn't planning on having to try this hard! But finally during th,e final part of the climb my persistance starts paying off: I realise that I'm slowly reeling her in, and as she reaches the top I'm probably only 10 seconds behind. At the turn of course she sees me and, of course takes off down the hill back towards the lake at top speed.

I'm not done yet, though, and there's a steady stream of runners yelling my name from the other side of the road which is having two effects: it's pumping me up (although I'm a bit too focused to reply much) and I'm fairly sure it's intimidating the heck out of Erin. If this is my home-town advantage than why not use it? Heh heh.

It's not often that you see a mile as fast as this from me in a race - 5:56 min/mile is 3:41 min/km and a LOT faster than my usual top speed - but it's downhill and I'm trying to win, so there we go. Erin is ahead for the first part of mile 4 but then there's a water station and to my surprise she slows down to grab a drink; I see my opening and jump right through it, into the lead. Wheeee!

The course plummets back down towards the lake and I'm basically giving it all I've got right now; as I approach the roundabout where things level out I'm therefore horrified to hear footsteps pounding up behind me. Crap! If this is Erin coming to get me then I'm toast - there's no way I can speed up beyond what I'm doing right now, or at least not without risking total meltdown sometime in the 2 miles that remain.

But no! It's a guy in a green singlet! I've never been so happy to be overtaken in all my life. I let him drag me along a bit faster as we head now to the path beside the lake - the opposite side to the usual course, which at this point is partially underwater due to the recent floods - and back towards Apex Park. This side of the lake is shorter so there will be a short out-and-back around the southern end; this will let me see exactly how close behind me Erin is, and hopefully that won't freak me out too badly.

There are more people shouting encouragement at me as I speed past the park, and at least they're not saying "Go girls!" which would suggest she's breathing down my neck. The 1km out part seems to take forever but finally I'm on the way back and by my estimate she's at least 40 seconds adrift. Phew! I'd like to relax now but there's no point tempting fate, so I just keep plugging until at last I'm in the finish area and yay! I cross the line for my 4th win in this event. James Davy has won overall and this is the 3rd time he and I have been victorious together: that's him in the top two photos of the collage at the top of this post. 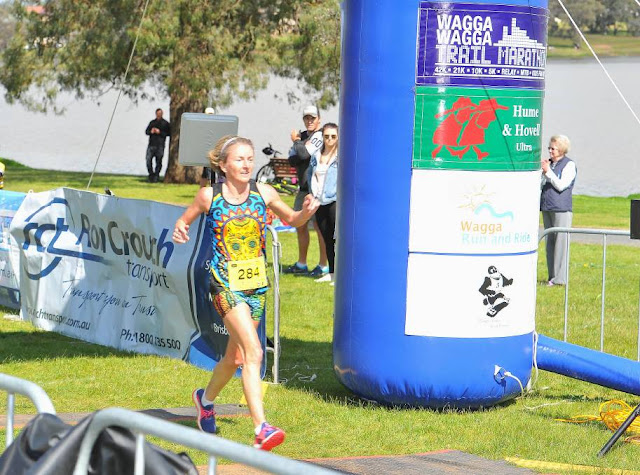 My son Jack is there to greet me - I told him I'd most likely finish around 38-39 minutes and so he's pretty impressed that I hit my target exactly - he rushes up to hug me and since he's mostly too cool to give me big hugs these days, I make the most of it and hang onto him long enough that the moment gets captured forever by a nearby photographer. Excellent!

Soon afterwards it's time for a surprisingly unorganised presentation - the medals are missing, there doesn't seem to be any sort of take-home trophy anymore and I have to leave before the AG presentations (at least I'm apparently not missing out on a medal since there are none) - but I do get to hold that mother of a trophy one more time and will have the satisfaction of seeing my name on there for another year. Not bad for a morning's work!

All in all, although today's time wasn't my best it certainly was a good effort and I'm proud of myself for persevering and outlasting yet another fit young chick. 10K is not at all my favourite distance so it's gratifying to see that I can still run one a fair bit faster than I could 10 years ago, too. Next up? How about some rest? It's been a long, long couple of months, after all.